With the growing popularity and rise of MMA in Ireland, Evolution Fighting Championship III promises to be the biggest show yet in the Midlands and I’m delighted to see another stacked card with 12 MMA fights on the card with 8 lads representing our local club from Tullamore Evolution MMA.

We have a lot of local clubs being represented on the card. There are clubs from Portlaoise, Nenagh, Athlone, Galway, Limerick, Dublin, and even Cork & Wexford. It’s brilliant to see the sport constantly growing and being locally supported by clubs, sponsors & a big support from local media such as radio and newspapers. I’m just delighted to be apart of it. It really shows how far the sport has come.

I’m really excited about all the fights on the night but especially looking forward to seeing the Evolution lads perform.

Our main event with Michael Davern (Evolution) vs. Richie Ryan (Sharkbait) will be a brilliant contest as Michael is a big fan favourite and both of these lads are undefeated.

I am also excited for our co-main event which promises to be a great match up. We will see the return of local fighter Martin Hickey (Evolution/Fusion) vs. Davy Murphy (Arena Wexford).

One of the fights I am particularly really looking forward to is Jason Quinn (Point Blank) vs. Waldemar Cichy (Nenagh Warriors) as these two are really exciting to watch and have both made huge improvements over the last few years.

We also have a local derby with two fighters making their MMA debut on the card with Mike Nash from Evolution MMA taking on Colin Murphy from Tuatha De Danann, a club I have huge respect for as I started training MMA there and they helped me a lot.

A fight that could potentially be ‘Fight of the Night’ is Chris Loonam (Evolution) vs. Przemyslaw Chmiel (Impetus) as these two bring it every time and look to put on a show for the fans every time they step into the cage.

It’s great that all these lads have a platform to showcase their skill in their own back yard, best of luck to everyone on the night.

Big thanks to all the fighters, clubs and fans for supporting Evolution Fighting Championship.

I’d also like to say a big thanks to our sponsors, WOC drylining, Siroccos restaurant, TC physiotherapy, The Woltrap, Nash Steel, Keara Nash health coach, Reveal Makeup Studios, The Court Hotel Tullamore and all the staff who has helped bring this show together. 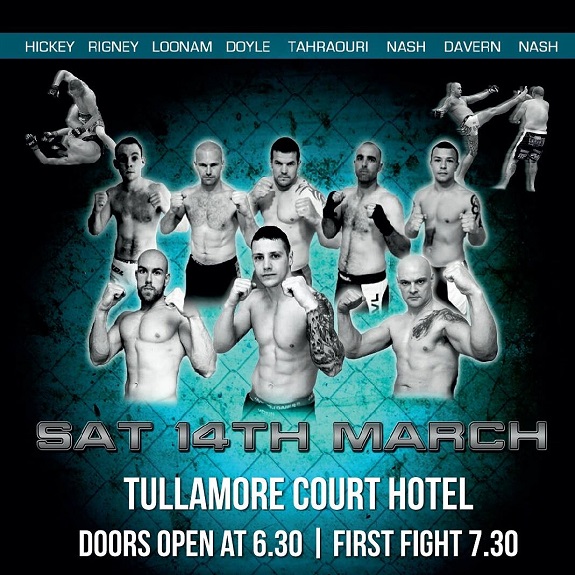