Superstar Conor McGregor has now entered the ‘Pound 4 Pound’ rankings at number 14. This is the very first time that an Irish fighter has entered the P4P list. McGregor jumps in ahead of Frankie Edgar following his emphatic TKO win over Chad Mendes on Saturday night and is also ranked as the number 1 featherweight in the world under Jose Aldo.

It is worth noting that Jose Aldo is holding the top spot in the P4P rankings and that he and McGregor will ‘probably’ be fighting January 2nd in Vegas. A win here for McGregor could very well see him listed as the number one fighter in the world (depending on how those deciding the rankings see things). But first McGregor will have to get through coaching TUF 22 opposite Urijah Faber. 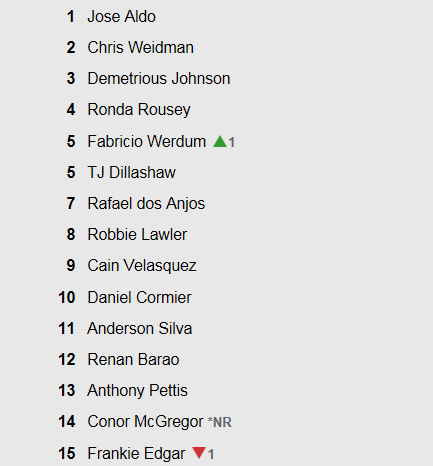