This Saturday in London Cage Warriors will host arguably the most stacked card in UK MMA history and are, rightly so, dubbing it “Super Saturday”.

The card is headlined by two title fights and along with a host of fighters hoping to get a title shot with a win this Saturday. At present Cage Warriors has just one crowned champion in their ranks, welterweight Nicolas Dalby, but there is a very good reason for this: the UFC.

Over the past couple of years Cage Warriors has established themselves as the top promotion in Europe. It wasn’t until a very recent interview with their chief Graham Boylan that I understood what Cage Warriors is providing and that is a stable and fighting environment for some of Europe’s finest fighters to compete. No more do fighters have to hassle with different promoters and hope not to be shafted with unprofessionalism. Fighters in Cage Warriors can now have a career path and now it is more obvious than ever that this path can lead you to the UFC.

Conor McGregor, Jim Alers, Rosi Sexton, Cathal Pendred (via TUF), and Neil Seery have all been snapped up by the UFC soon after capturing titles in Cage Warriors, so it is more than evident that the UFC has a close eye on the promotion and the talent in it.

Stevie Ray (14-5) and Curt Warburton (13-4) do battle for the vacant lightweight title and Jack Hermansson (7-2) will face-off against Norman Paraisy (14-3-2, 1 NC) for the vacant middleweight title. All four fighters undoubtedly would love to fight in the UFC (get back to the UFC in Warburton’s case) and will see capturing a title this weekend as a step in the right direction.

Other fighters snapping at a title shot and/or a place on the UFC roster that are fighting this weekend include Bruno Carvalho, Jack Mason, Bola Omoyele, Jack Marsham, Ben Alloway and more.

In short, Cage Warriors 69 could prove to be a pivotal event that will help define the careers of many of the fighters in action this Saturday. Do not miss this event!! 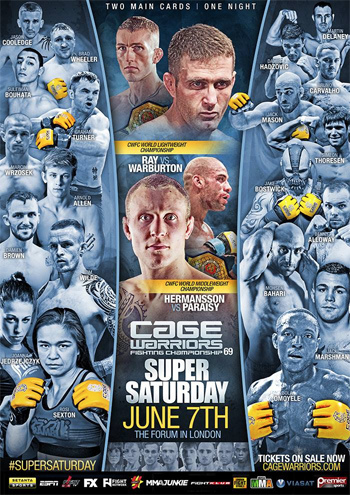