MMA and UFC veteran Joe ‘Diesel’ Riggs (40-14, 1 NC) was all set to make his surprising UFC return after a recent career turnaround. He was supposed to be fighting this weekend in Brazil, however, a couple of months ago an accidental incident with a gun where Riggs shot himself in his hand and leg ruled the 31-year-old out.

Riggs recounted the incident with LastWordonSports.com where he said he had made peace with death and even said goodbye with his son.

“I was lying on the floor, and I had lost a lot of blood. The pain was gone and I started just wanting to go to sleep. That’s what happens when you’re dying, you just want to sleep. My wife, Lisa, pretty much had her fist in the hole in my leg trying to get the bleeding to stop. She (Lisa) was actually trying to get in there and pinch off the artery. At this point I didn’t think I was dying, I knew I was dying, I had accepted it. I asked Lisa to wake our son up so I could say goodbye to him. I was eerily calm, it was very weird. My son came out, now I feel horrible because of what he had to see. I was covered in blood, and my seven year old son sits down next to me. I gave him a hug. I told him that I was dying, but that I was proud of him and that I would always love him, and that I would always be with him.

“It was a f***ed up thing man, it was horrible. I’ll tell you what man during that staying alive was hard, I wanted to go to sleep and the guys working on me kept me awake. I mean honestly at that point I had made peace with dying.”

The below pictures are via TMZSports, hard to think that he is aiming for December return. Here is wishing him a full and speedy recovery. 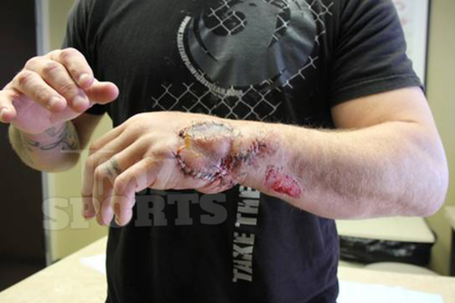 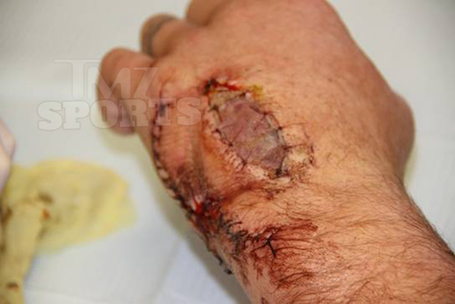 Bas Rutten stitches his own leg with needle and thread