We are now two days post UFC on FOX 10 and the dust has settled from what seemed to be a rather lacklustre event mainly due to it’s main and co-main event. So what did we learn coming away from it?

1. Benson Henderson isn’t impressing anyone.
8 UFC wins and 8 decisions, that is simply depressing. We should be thrilled at the former champ getting back to winning ways and working towards the title, but we are not. Thomson came away with more from that fight than ‘Bendo’ did. Thomson battled through a broken hand in the first round to take down his opponent at will and arguably should have won the fight. Even Dana White wasn’t impressed with Henderson stating that he wouldn’t be getting a crack at the title off the back of that fight.

The UFC is in desperate need of breakout stars and champs who can excite the crowd and Benson Henderson is not (currently) able to give that to them. However, he has the talent and the drive to change things. Fingers crossed.

2. Stipe Miocic may aswell have not fought.
Miocic, one of the more promising heavyweights in the UFC, earned nothing as a result of his unanimous decision win over Gabriel Gonzaga. Coming into this fight Miocic had a lot of steam behind him after his won over Roy Nelson but that momentum stopped there. The best thing for Miocic right now is that no one remembers this fight as they will find it hard getting motivated to watch his next one. The man known for his KO’s now hasn’t got a finished in three fights over nearly two years and was also makes things worse is that Gonzaga had a broken hand and gassed early on but still managed to look the more likely to get the sudden finish.

3. A heavyweight stud now becomes a threat to light-heavyweights.
Nikita Krylov opened the fight card with a highlight KO over Walt Harris and thus earning his first UFC win. He looked sluggish and didn’t seem himself in his debut, a decision loss to Soa Palelei, but he made up for that in a big way this time with a quick (25 seconds) headkick KO. Krylov is just 21 years old and has a very impressive 16-3 record. After the event he declared at he will be dropping down to light-heavyweight for his next fight. Off the back of that last performance and his potential he could be a threat to anyone in the new division.

4. Hype-train got derailed.
He was 10-0, brother of the champ and with one UFC win already to his name Sergio Pettis was surely on his way to match his brother at the top. Very few gave Alex Caceres a chance to win this but like the old saying goes “anything can happen in this sport” and the TUF veteran pulled off the upset win over Pettis. Now don’t get me wrong, the younger Pettis can still make it to the top but this has put an early unexpected setback in his career. Pressure will be on him to win his next fight and that is not an ideal scenario for a top prospect to be in.

5. Cerrone is simply fun to watch.
Whether he is in the cage landing headkick KO’s or sitting at the press conference drinking cans of Budweiser, Donald ‘Cowboy’ Cerrone is one of the top overall talents in the UFC today. He can talk, he comes to fight and is a character, all of which are the ingredients of a top star. He wants to fight 6 times in 2014, I say let him fights as many times as he wants because he is one of the few fighters that everyone loves to watch.

Other things we learned;
The attendance for this event was around 6,000 less than the corresponding events in Chicago over the past two years.
Josh Thomson is considering retirement.
This event was the first UFC to feature 3 headkick KO’s.
UFC will switch its event on ‘Superbowl Weekend’ to the Sunday if the Superbowl does change to a Saturday. 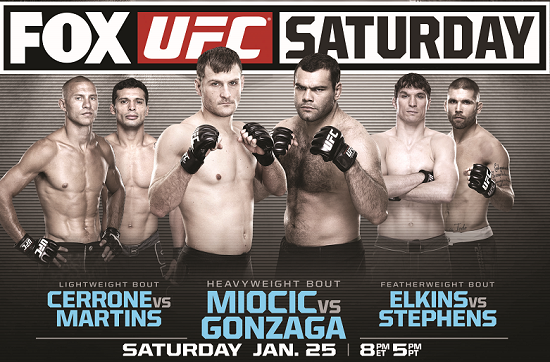