Last weekend we saw Fabricio Werdum (18-5-1) completely dominate Travis Browne (16-2-1), an outcome very few predicted. Brown went in as the favourite and many expected him to notch up another highlight-reel KO en-route to a title shot but Werdum was there to spoil that parade. The 36-year-old Brazilian churned in another top class performance that proved that he is still evolving and improving as a fighter.

This results (and performance) got me thinking about other similarly shocking outcomes from the UFC’s most unpredictable division. I don’t count flash KO’s i.e. JDS over Cain Velasquez but rather the fight has to be completely dominant from the opening bell until the end of the fight.

A fight I count as my favourite fight ever in all of MMA. Randy Couture was coming out of retirement at the age of 43 to take on the much bigger and younger Tim Sylvia for the heavyweight title and right from the get-go Couture made his mark on the fight by knocking the 6ft 8in giant to the canvas with the first punch. From there on he dominated and controlled the fight for five full rounds to win 50-45 on all judges scorecards, the picture above says it all. Many people baulked at Couture coming out of retirement to fight the man mountain Sylvia who was a 6-fight-win-streak, which included back to back wins over a fighter who at the time many considered unbeatable in Andrei Arlovski. 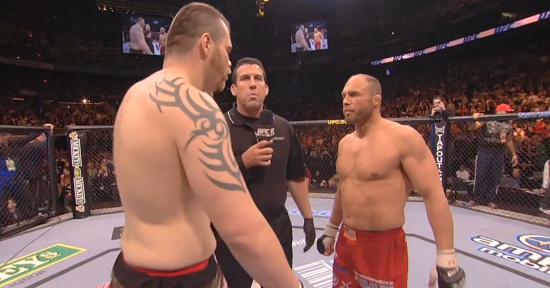 Ian Freeman, the first English fighter in the UFC, was up against it at UFC 38 facing off against the new young undefeated stud on the block in Frank Mir. Freeman was going in showing some mixed form going 2-4 in his previous six fights, Mir on the other hand was coming in undefeated with four wins including three first round stoppages a lot of hype surrounding him. Some thought that the UFC was using Freeman, who was well known as a legitimately tough fighter, to help boost Mir to the next level.

Ian Freeman lived up to his nickname as “The Machine” when he simply broke Frank Mir in their fight. It only lasted one round but the beatdown suffered by Mir was similar to that of a man who was beaten for five full rounds. And the only time we would see Mir in a similar state until he faced Lesnar and Overeem. What makes this story truly unique was that Freeman’s father passed away the day beforehand and in a bittersweet moment the Englishman dedicated the win to his father. An incredible moment in MMA. 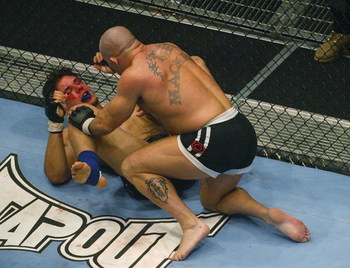 Fans who disliked all the surrounded Brock Lesnar will role their eyes at this one but the UFC and Lesnar’s previous performances has most of us fooled heading into this one. Lesnar was arguably the most visually the biggest and baddest heavyweight ever to step into the Octagon. The build-up for this fight was all about Velasquez’s wrestling and tempo and how both areas were Lesnar’s strongest. This added to the obvious size difference between the pair seemingly spelled out a hard day at the office for the Mexican-American.

Very few, including yours truly, expected the fight to go how it did. Velasquez turned big bad Brock into a puppy dog rolling around the cage trying to avoid the onslaught of punches before dropping down to the canvas to give up. Yes we saw Brock lose before but that was the first time in such fashion.

Striker vs. Grappler in the early days of the UFC normally resulted in a horrible time for the striker. But that wasn’t the case for Maurice ‘Mo’ Smith who shocked the MMA world with his unanimous decision win over ‘The Hammer’ Mark Coleman to capture the UFC Heavyweight title in a ‘Fight of the Year’ winning fight.

‘Mo’ was coming into this fight as a massive underdog and had an underwhelming MMA record of 5-7. Compare that to Coleman’s highly impressive 6-0 record which included wins over Dan Severn, Don Frye and Gary Goodridge. Ok so this fight may have not become the dominant display from bell to bell on behalf of Smith but what other fighter can be on the deck while ‘The Godfather of Ground & Pound’ is on top and not take any damage? Smith’s cardio served him well as he nullified Coleman on the ground and found his opportunity to get back to his feet and picked him apart with punches and kicks for the rest of the fight. 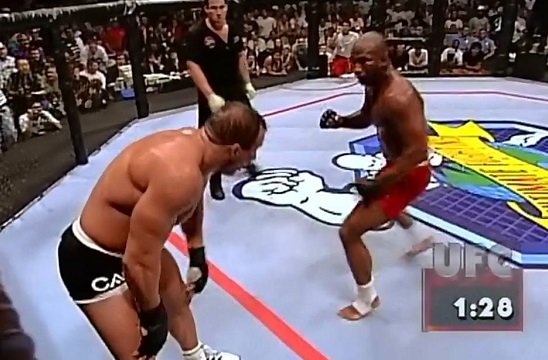