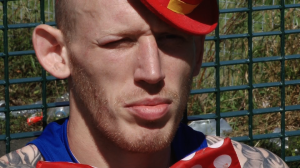 Ahead of his return to the cage at BAMMA 13 Emma Bramford sat down with Colin “Freakshow” Fletcher WHOA! TV‘s Emma Bramford

EB: Hey Colin, back home to BAMMA, you looking forward to putting on a show?
CF: Hi Emma, yeah it’s great to be back at BAMMA, I can’t wait to get back to old ways and put on a show for everyone.

EB: Are you looking forward to just being ‘you’ Colin ‘Freakshow’ Fletcher?
CF:100%.  I felt lately I was being directed to be someone else and tone things down a little but I am a weirdo through n through so it’s going come back out…The Freakshow is back.

EB: Who are you going to be bringing with you? The Gimps? The Bicycle or both? or are we in for something completely different this time?
CF: Naa I’m going to mix things up I never do the same thing twice. I’m working on a few options but I’m keeping them under wraps till September 14th..

EB: You’re facing Tim ‘Super Human’ Newman, who is no stranger to BAMMA himself, what do you know about your opponent if anything?
CF: I know he is a good guy and an awesome fighter. I am looking forward to mixing it up with him, he is definitely a human but I will be looking forward to seeing if he is ‘super human’ or not (laughs)!

EB: Your time out in Australia for The Smashes, how was this for you on a personal level, being away from your family for that amount of time, did it play tricks in your head on an emotional level or was it a case of focus, focus, focus, you are there for a much bigger reason, get on with it, train, train, train?
CF: No I am slightly crazy anyway so I just had to deal with the normal voices (laughs). It was awful being away from our lass and the kids for so long though I had a few cheeky cries on the sly but over all I had a good experience and people got to see what I’m really like.

EB: The Smashes made great viewing for everyone, but we only got to see 1 hr a week, in reality what was your daily routine like?
CF: It was pretty boring really we got up, ate, trained, ate, trained, ate then went to sleep so in the gaps we did loads of weird things to fill up the day about 80% of the best funny moments never even got shown.

EB: You have a good friendship with Ross Pearson, is that anything to do with the fact you’re both from the North East of England?
CF: Sort of and also the fact that were distantly related! I’ve known Ross since we were small kids, he is a top guy.

EB: How was it for you to have finally reached your goal of gaining a spot in the UFC?  Was it everything you had thought it would be?
CF: Yeah it was weird, I felt a lot of pressure, before then I did not really see myself as a good fighter, I just loved to compete and with that in my mind I think I was a better fighter, but then all of a sudden everything’s results based and it is like you have got to win, you got to be better, you got behave a certain way and I don’t think it really suited me. I thought everything would be the same. I think some people are more suited to dealing with that kind of thing but I am a bit, well, strange really!

EB: Mike Ricci fight in Canada, you weren’t feeling too well, can you tell me more?
CF: I just felt awful really, I’m not sure if it was a bad weight cut, maybe jet lag as I got there on the Wednesday night of the week of the fight but I have never felt so flat and lifeless in a fight, it was strange, I just couldn’t push my body to perform half as much as I normally do.

EB: Overall would you change your experience you have had in the UFC at all?
CF: No not at all, I am massively grateful for the opportunity the UFC gave me, it was an honour to fight for them and I would love to again one day, I would be better equipped to deal with things having been though them before, I’m 100% sure if I had been given a little more time I would of adjusted and got back on track but at the end of the day as long as I am fighting I’m happy no matter who it’s for, as long as people enjoy watching me fight I will continue to find.

EB: And now we are lucky to see you back at BAMMA on September 14th against Tim ‘Super Human’ Newman; as they say everything happens for a reason – would you agree?
CF: Yeah true I’m going to enjoy this one.

EB: Anyone you would like to thank?
CF: Mostly my fantastic wife and kids then my coaches Nick Hands, Warren Olliver, Nigel Scope, Paul Hubber and Barry Gibson.

If you were to have a Dinner party, which 3 guests would you invite past or present and why?
CF: Elvis Presley because he is the King baby!  Gene Wilder as he is the funniest person ever and my wife be