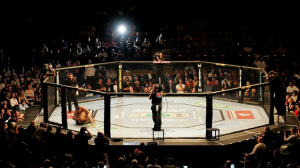 Ever since the surge in popularity for MMA, the arguments between staunch fans of the sport and boxing purists seem to never dwindle. There have been many popular boxers and boxing personalities who have taken shots at MMA – one of them being Floyd Mayweather Jr. But it seems that he has changed his tune regarding MMA.

In an interview with Fight Hype TV yesterday, Floyd Mayweather revealed that he is interested in promoting mixed martial arts fighters. Mayweather, who has gone public with his distaste for MMA in the past, has completely flipped his stance on the sport.

Al Haymon is one of the most influential boxing advisors/managers around; he has close-ties with the likes of Danny Garcia, Adrien Broner, Andre Berto, and of course, Floyd Mayweather. If Haymon and Floyd were to dive into the sport, one might think of the possible effects it could have on the it’s landscape.

Floyd Mayweather Jr. is not only the pound for pound king in boxing; he is the pound for pound pay-per-view king. It’s inevitable that the issue fighter pay will resurface. While it’s not likely that any mixed martial arts fighter, in foreseeable future, will make anything close to the guaranteed $41.5 million that Mayweather earned for his decision win over Saul Alvarez last weekend – could Mayweather help some fighters make the kind of money that they have been asking for?

If Mayweather does try his hand in promoting MMA, it will be interesting to see if he and White do come to a promotional agreement. White has stated that he wouldn’t cross-promote the UFC brand with other promoters. This was evident during the ‘Fedor Saga’ when M-1 demanded cross-promotion with the UFC for Fedor Emelianenko’s services, a contractual agreement which was one of the major reasons that Fedor never signed with the promotion.