Top European promotion KSW returns this weekend and it brings with a very stacked card filled with title fights, top talent, veterans of the sport, famous names and even a Gracie.

Despite hailing from Poland this will be Drwal’s promotional debut and having gone 4-0 since his UFC release he has proved his worth for a shot at the title.

Materla has defeated Kendall Grove, Matt Horwich, Rodney Wallace and many other in recent years. Finding suitable competition for the 31-year-old has grown to be a challenge for the promotion but he may have found his match in Drwal.

The former world’s strongest man is arguably in the best form of his short MMA career having won his past three fights, two of which were against UFC veterans. He now faces another UFC vet in Rolles Gracie, son of the late Rolls Gracie.

Unsurprisingly Rolles has won all of his 8 victories via submission. He has competed in the UFC, WSOF, IGF Japan, ONE FC and his last fight was a KSW title fight against Karol Bedorf, which he lost via KO. It is a very risky fight for ‘Pudzian’ as each of his losses has come via submission. Nonetheless whenever he fights it is always undeniably appealing albeit never technically sound.

The following fight is surely to be fireworks as Karol Beforf (11-2) squares off against combat sports legend Peter Graham (11-7). Bedorf is currently riding a 5 fight win streak enjoying wins over Rolles Gracie, Oli Thompson and Karl Knothe during that period.

Graham is kickboxing icon having competed all over the world in almost 75 fights. The 39-year-old Australian won his KSW debut last year and is currently 10-2 in has past twelve fights in MMA.

Also on the card is an outstanding battle between UFC vet Goran Reljic (14-4) and Bellator vet Attila Veigh (29-5-2) for the vacant KSW light heavyweight title. The Croatian Reljic is currently 6-1 since his UFC release and Veigh is fresh off a 5-1 stint in Bellator and is 9-1 overall in his past ten fights.

Below is a screenshot of the card from Sherdog. 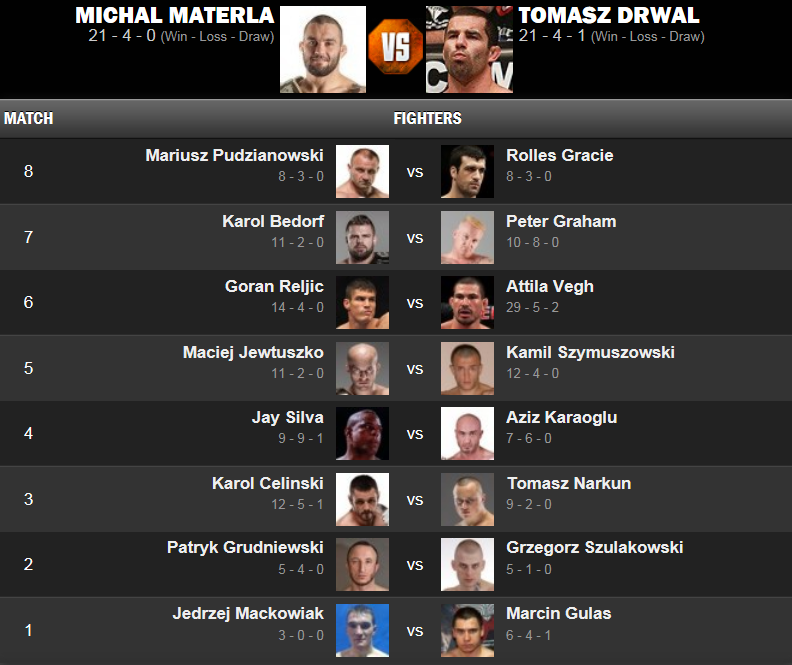