Last week  the news broke that UFC Bantamweight athlete Jessica ‘Evil’ Eye had her first UFC win against Sarah Kaufman overturned to a No Decision. Eye was said to be punished with a year-long probationary suspension and a fine of $1875.

The Texas Department of Licensing and Regulations revealed that the change came as a result of a failed drug test by Jessica Eye after her controversial split decision  win against Sarah Kaufman at UFC 166.

Last Wednesday night in the states the UFC released the following statement:

“The UFC received word of the fully probated suspension and fine issued to Jessica Eye by the Texas Department of Licensing and Regulation. The UFC intends to honor the probation, which will not force Eye to miss her scheduled bout at UFC 170.”

“I was recently alerted to the fact that I was issued a fully probated suspension and fine by the Texas Department of Licensing and Regulation. While I intend to discuss with the Texas Department of Licensing and Regulation the overturning of my victory at UFC 166, I have accepted the terms of the probation and intend to compete at UFC 170 on Feb. 22. I pride myself on following the rules and representing my family, teammates, sponsors, and fans in the best light possible. I apologize for any distractions this has caused.”

Not letting this take any focus of Eye’s humbling appreciation and the love of her father she tweeted the following:

But in another turn of event’s it was suggested that Jessica Eye has ‘Deleted’ her Twitter account.  I decided I would take a look myself and found on some occasions I could not find ‘JessicaEvilEye’ and on another visit Jessica has now choosen to keep her Twitter account set to ‘Private’. 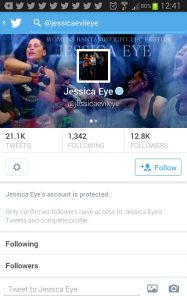 As to why the decision that The Texas Department of Licensing and Regulations took so long to over turn a decision on a ‘failed drugs test’ and issuing of only a probationary status, with the UFC still allowing Jessica Eye to fight when they have been to known to fully suspend fighters from fighting is still the million dollar question on everyone lips.

Jessica Eye will take on Alexis Davis at The Mandalay Bay Center  in Las Vegas as planned in two weeks time at UFC 170 on February 22nd showing on the prelim card on Fox Sports 1 network.