Today has become a very interesting day for the UFC 186 card taking place later this month in Montreal, Canada.

Quinton ‘Rampage’ Jackson was ruled out of his fight with Fabio Maldonado after Bellator won an injunction in court earlier today stopping him from competing at UFC 186.

TJ Dillashaw vs. Renan Barao had been scrapped from the card after the champ suffered an injury and a Rory MacDonald vs. Hector Lombard fight was also expected to happen but that fizzled away after Lombard failed a test.

Now today Benson Henderson put out a tweet saying he would be down for fighting and that he could make welterweight in time. His challenge was accepted by none other than Ireland’s own Cathal Pendred who is undefeated in the UFC at 3-0. 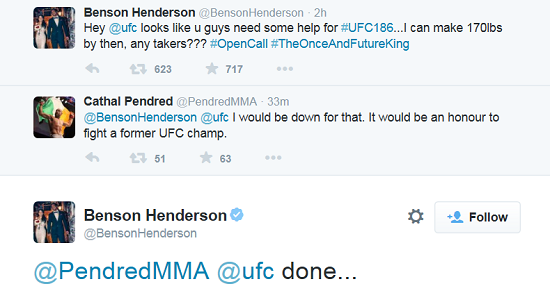 Although both fighters have agreed to fight, this does not mean it will happen. We will have to wait and see whether the UFC will actually put this fight together.

Alan’s Angle: This would be an interesting fight to make for the UFC and it would add some much needed star power to the 186 line-up.

Regardless, I think the UFC might not opt to putting this fight on the card. Pendred is already scheduled to compete at the next card in Mexico. However, that is not on until June and the Irishman could be ready in time or it is plenty of notice to find a replacement against Mexico’s Augusto Montaño.

If the UFC do actually put this fight together then Pendred will join his teammate Ais Daly on the card.