BJ Penn has called out Lightweight Nik Lentz for a fight at #UFC197 on 5th March.

The two have been going back and forth and Lentz had called out BJ on numerous occasions on various podcasts, and now the former UFC Lightweight Champion has responded.

BJ was pictured earlier this week with Greg Jackson, prompting many to question if he would be making a return to the Octagon and it now seems like he has an opponent in mind.

Penn has been out of action after suffering a TKO stoppage against Frankie Edgar back in July 2014 and many had called for the Lightweight legend to hang them up, although it seems that he has Lentz in his sights and is keen to go out on a win, following three back to back losses.

Lentz on the other hand is coming off a decision win over Danny Castillo in his return to Lightweight and is 5-2 in his last seven bouts.

It is unknown exactly what started the beef between the two, although nutritionist Mike Dolce’s name has been bought up in a few interviews. No word has been made by Lentz or the UFC at this stage as to whether or not the Lightweight showdown will take place. 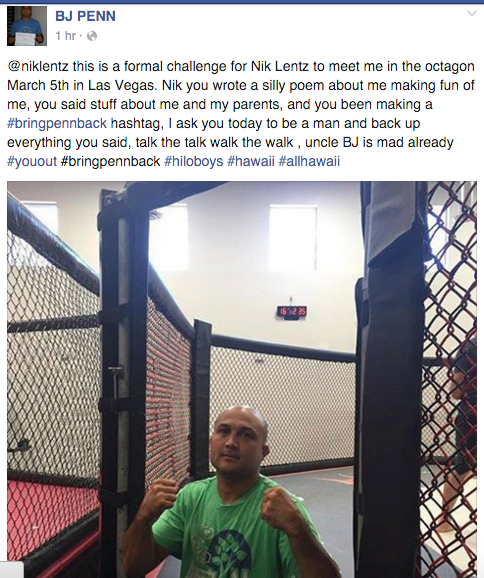