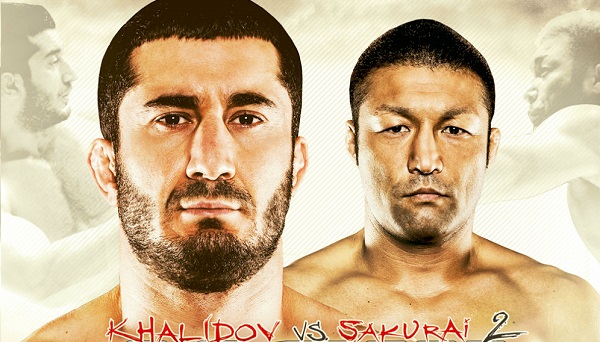 Polish MMA promotion KSW will have their 25th numbered event this Saturday night in Wroclaw and it could lay claim to be the best yet. Past KSW events have been littered with notable worldwide MMA fighters including Matt Lindland, James Irvin, Pudzianowski, Kendal Grove, Sokoudjou, Houston Alexander and many more.

KSW 25 is headlined by a rematch between Mamed Khalidov (27-4-2) and Japanese legend Ryuta Sakurai (24-17-6). The pair fought to a draw in 2010 at KSW 13. Khalidov, who is arguably the best middleweight in the world not on the UFC roster, has been a staple of the KSW promotion and is undefeated in fourteen appearances in the banner with a record of 12-0-2.

Sakurai may not have the best record on paper but the 42-year-old is 9-3-2 in his past fourteen fights with those losses coming at the hands of UFC fighter Riki Fukuda (x2) and UFC & Pride veteran Kazuhiro Nakamura. This main event should provide an entertaining bout and one that challenges Khalidov to iron out his creases in his near flawless record while testing the theory that Sakurai still has what it takes to compete with the best of them.

Aslambek Saidov (14-3) defends his welterweight title against veteran Daniel Acacaio (30-13). Saidov is another KSW regular having fought over ten times for the promotion and he faces his toughest challenge to date in Acacaio. The Brazilian has fought all over the world and competed against some of the elite fighters from all four corners of the planet, fighters like Paul Daley, David Bielkheden, Rousimar Palhares, Akihiro Gono amongst many litter his fight resumé.

American heavyweights Mike Hayes (19-8-1) and Virgil Zwicker (11-3) are also set to clash on the card. Hayes, a former Cage Warriors champ, recently snapped a four-fight skid with a headkick KO over MMA legend Jeff Monson. Strikeforce and Bellator veteran Virgil Zwicker will also be looking to get some consistency going after alternating between wins and loses over the past seven fights. Zwicker is somewhat of a KO artist with 8 knockout wins but will he be able to get another on a man who has yet to be stopped by KO or submission in Mike Hayes?

European MMA veteran Krzystof Kulak (25-13-1) makes his return to action after a year off and he faces exciting German fighter Abu Azaitar (7-2) in a fight that is destined for fireworks. It has been over 10 years since Kulak made his debut so it is hard to believe that he is still only 32-years-old. Azaitar, who has looked impressive in 2013 going 2-0 with two TKO wins, will be looking to cap off the year with, what would be, a massive win over Kulak.

Also on the card, a pair of UFC veterans take on two local fighters. Matt Horwich (28-21-1) faces Piotr Strus (8-2) in a classic veteran vs prospect match-up and Oli Thompson (11-5) takes on Kamil Walus (4-1) in a BIG heavyweight showdown.

Click here for full card and more information on KSW 25.