For many, Brazil represents the heart of South America. Known for its beautiful beaches, people and culture, it has been a well traveled vacation destination for people from all over the world. In contrast to the quiet, natural beauty of this tropical paradise, Brazil is also a well known mecca for practitioners of combat sports. Throughout the history of mixed martial arts, many of the greatest names have hailed from Brazil and thanks to the brothers Gracie, if Brazil was not on the combat sports map, their practicing of Brazililan Jiu Jitsu has made it a favorite and well known training ground for fighters.

Today, not only are some of the toughest mixed martial artists and BJJ practitioners emerging from Brazil, but also kickboxing/muay thai specialists. One such fighter is Thiago Michel. While GLORY 12 was not this fighter’s first time in the ring he left a lasting impression. After his unanimous decision victory in New York, I had the opportunity to talk to Thiago about his background and first time in the Glory ring.

Hailing from Minas Gerais in Brazil, Thiago Michel began training in kickboxing with his father at age 12 and began his professional career six years later. If his face seems somewhat familiar, that’s because he’s also racked up an impressive MMA career, most recently fighting for Bellator. In his GLORY debut, Thiago took on Paul Marfort and earned his first victory with the organization. While Marfort lasted three rounds, Thiago challenged him at every turn with spinning backfists and knees. After his fight, Thiago stated that he is very happy and excited to be fighting for GLORY. On whether he preferred kickboxing or MMA, Thiago stated that he really likes the stand-up aspect of fighting and hopes to continue with the Glory organization.

For more information about this new and exciting fighter, check out his gym’s website at www.elykickboxing.com.br 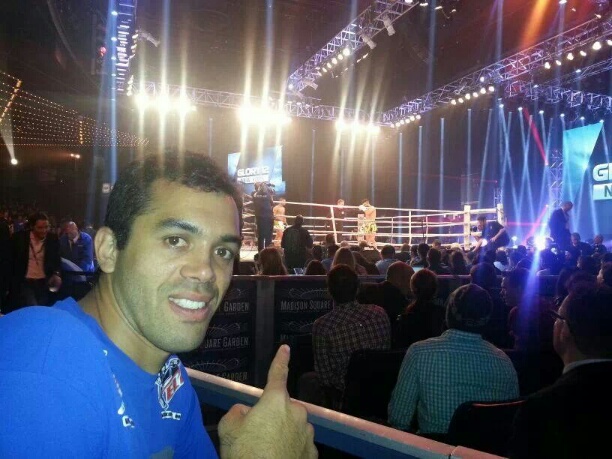