It has recently been announced that the new promotion in the ever growing UKMMA scene, Warrior Fight Series, is set to make its debut show on 14th June 2014 at The White Oaks Centre. For those of you who have not heard the name WFS the promotion is run by Harry Shoebridge (promoter) and George McCann (press manager) who are both very well known and respected members of the UKMMA community.

Harry (a former pro-fighter 2-1 and former match maker) and George (a student studying finance and owner of Love2Fight.com) have knocked heads together to come up with this exciting and new promotion which is set to kick off with their debut show on 14th June. So how are Warrior Fight Series looking to differentiate themselves from the vast and ever increasing number of promotions within the UK? “It’s the little things we are doing which will set us apart, but we will grow upon each show developing our own brand. You’ve got to be at the show to witness it.” And the number of competitors don’t seem to cause them any sleepless nights so far, “the increase in number of shows is great, providing they’re doing it properly and not cutting any corners.”

To build and grow a successful MMA promotion within the UK seems like a very arduous task for just two young lads but Harry is pulling from previous experience to overcome the difficulties of getting things up and running. “It is hard, but because of my past experience I feel that I have found it easier than a newcomer would.” The duo are keeping very close and building from each other’s experiences to help build the show and support each other with the ever growing lists of tasks at hand. “I promote the show” said Harry, “and George takes care of the PR. Whilst we both speak about the matches, so in effect the matchmaking is very much a team effort.”

One of the major factors for consideration when planning an event is clearly the amount of fights planned for the card and WFS have a clear plan for that element. “We are planning a minimum of ten bouts on the night as we want to finish the show relatively early.” The reason being the first card coincides with England’s first football world cup game. The structure of the card has been a work in progress as “initially we had planned to have a really solid professional main and co-main event with the rest of the card fought under unified amateur rules.” The main and co-main event have always been the plan but “opportunities presented themselves for more pro fights and now we have a total of five professional fights”.

Whilst the first card takes place at the White Oaks Centre in Kent the promotion are already looking to venture into new areas for the next show. “We plan on travelling. Our plans are big, this event marks number one and we’ll be back soon after the first event.” And it seems that the promotion will not look to focus future shows on any specific town in the UK. “The London area isn’t the be all and end all of UKMMA. You can expect us to travel up and down the country in the near future.”

Learning to walk before they can jump is important to George and Harry and as such fans will only be able to watch the show if they are there live on the night, but for those who can’t make it “the fights will be uploaded to YouTube soon after the event.” The future does look bright for the upcoming promotion though and without giving much away also made the comment “the event however will be filmed with TV quality production in order to cater for future TV commitments” which could potentially be big news for the show. 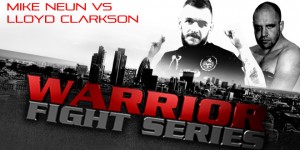 So if you didn’t already know, hopefully now you have some more insight into the new promotion on the UKMMA scene. The event is shaping up very nicely and at present features two title fights and a host of various weight division bouts. For more information on the card visit www.WFSMMA.com and twitter @WFSMMA

The card as it stands today with more to be announced is;

Credit Tom Slezawoski for the image