London, UK – Tickets for the UK’s best night of fighting action in 2014 are on sale now.

The Ultimate Fighting Championship (UFC) returns to London on Saturday 8th March, where it will take over the O2 Arena, headlined by an explosive fight between Londoner Jimi “Posterboy”  Manuwa and the world no.2 light heavyweight Alexander “The Mauler” Gustafsson.

A victory for the powerful Manuwa, who is undefeated in his professional career (14-0), could see him handed a title shot later this year.  Alexander Gustafsson will prove the toughest test of the Croydon-based fighter’s career, after the Swede’s narrow defeat to champion Jon Jones in what many MMA fans called the best fight of 2013.  Manuwa called for the fight and believes that by knocking the No.1 ranked challenger out, he can get right in the title hunt.

UFC is reporting it’s biggest ever pre-sale for a UK event, which is the fifth to be held at the iconic O2 Arena.

Michael “The Menace” Johnson, ranked no. 13 in the lightweight division, will meet Melvin “The Young Assasin” Guillard in the co-main event.  Johnson has racked up two impressive wins in the second half of 2013 to see him climb the rankings.  Guillard holds the record for most TKO / KO victories in the lightweight division and will be looking to finish the fight in blistering style.

London’s Brad “One Punch” Pickett, who is one of the UFC’s most exciting fighters, will fight in his hometown under the UFC banner for the first time in his career.  Brad, who has a remarkable four Fight of the Night titles to his name, will make his flyweight debut against no.3 ranked Ian McCall, in one of the most intriguing battles on the card.

UK fans will also get a chance to see The Ultimate Fighter (TUF) runner-up Davey “Dangerous” Grant in the Octagon for the first time, as he takes on Canadian Roland Delorme.

Jimi Manuwa, said: “The fight’s only five weeks away now and I can’t wait to get into the Octagon, in my home town, and put on a show for the fans.

“This is definitely my biggest fight yet but I’m not afraid of Alex.  I’ve beaten every single fighter I’ve faced within two rounds and I don’t plan for this fight to be any different.  I want to be World Champion, remembered as unbeaten and a knockout specialist.

“I’ve never trained as hard as I’m training for this fight and I promise a fans a fight they won’t forget – lions eat first!”

Alexander Gustafsson, who was recently chosen in a global fan vote to be on the cover of a the new EA Sport UFC game, said: “I am really looking forward to this fight, I think it’s a great match up.  Jimi is a tough guy but I’m ready for him.

“I am preparing for five rounds, but it won’t last that long!

“I’ve fought in London before and it always has big, loud crowds.  But I know a lot of fans are travelling over from Sweden to get behind me on the night.”

Other British talent on the card includes Luke “The Bigslow” Barnatt who will be looking to hold on to his undefeated record against Mats Nilsson who will be making his UFC debut in London. 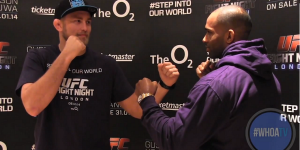 All bouts are live and subject to change. For more information visit ufc.com