They are two MMA veterans and both are pioneers in their own right. Sexton is the UK’s first ever female fighter to compete in the UFC and is highly regarded in UK MMA. Fujii, a Japanese legend, has been competing around the world fighting the toughest fighters and inspiring many women in the process.

Sexton (13-4) was released from the UFC following a two fight stint in 2013 that saw her churn in two admirable performances that showed how much heart is in that small frame. Fujii (26-3) retired from MMA in October last year, putting an end to a glittering career that saw her only been beaten by two opponents, Jessica Aguilar twice and Zoila Gurgel once.

In a blog entry by Sexton she gave her interestingly insightful thoughts on what it is like for her as she winds down her 12 year pro career stating that last year, crazy as it was, is not the way she wants to end her career.

Sexton then laid down the respectful challenge to Fujii: “So – Megumi Fujii – what do you think? I know you officially retired after your last fight, and if you really don’t want another one, then I understand – but I have to ask. I think it could be good for both of us. If you want it, Cage Warriors have offered to put this fight on, at any weight you choose between 115 lbs and 125 lbs. How about it?”

Alan’s Angle: Perfect fight, no more fitting than what Rosi Sexton deserves. I had the pleasure to see Sexton compete in person twice in recent years and have nothing but respect for her. It is a long shot that Fujii will come out of retirement. As Sexton’s blog eludes too, by my understanding, retirement is something that is important to do properly in a fighters career and Fujii done that in her own respective career last year against Jessica Aguilar in Japan. The glimmer of hope is that that fight ended somewhat anticlimactically for Fujii, two accidental eye-pokes drew an early end to that bout. 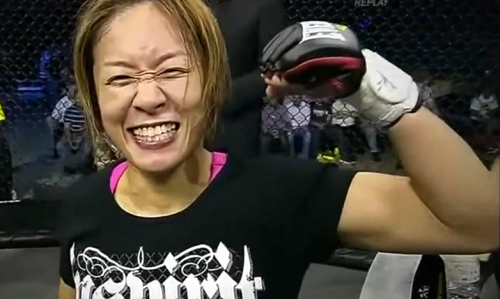