Nathaniel “The Prospect” Wood is one of the top commodities within the UKMMA Bantamweight division and while he may be coming off of the back of a tough loss to Mike Cutting at BAMMA 18, Wood’s is desperate to put the loss behind him and look forward to his next fight. “I want to get back in there but maybe not within a month (like Wood did following his only other loss to Ed Arthur). I’m planning on a holiday in June so I would like to fight before that. I thought about having a break but looking at the fight it was stupid mistake and I’m always fighting fight so I’m ready to go again.”

Wood’s like most martial artists is probably his own biggest critic and losing a fight to such a “rookie mistake” is hard to justify to himself. So just how has Nathaniel dealt with the loss? “To be honest I get quite emotional with it and this one in particular because I made sure I was so well prepared. I had trained for 10 weeks solid and it cost me money having time off work to train so yeah I found it very hard. It was heart breaking because I didn’t feel that I actually got a fight out of it. It’s a bit soul destroying for the first few days which were tough but I need to look at what I can take from it and learn and improve.”

The fight against Mike Cutting was due to take place at 135lbs in the Bantamweight division, however, Mike Cutting missed weight in a big weight tipping the scales at 144.8lbs. The lack of respect and unprofessionalism on Cutting’s part certainly played on Wood’s mind ahead of the fight. “It pissed me off to be honest and I know you should never go into a fight emotionally attached but it annoyed me. He said he was stuck in traffic and would have made the weight if he had got to Wolverhampton on time but he should have already cut it before heading there. It wasn’t professional and yeah it was playing on my mind.”

Weight cut aside Wood’s has admitted the result and knows that regardless of the weight that Cutting still won the fight fair and square. But is it a fight that The Prospect would like to avenge down the road? “I would like to eventually meet again but I will leave that to my manager and BAMMA matchmaker (Jude Samuel) to work out. I would like to have a rematch with him but that rematch does not excite me as much as one with Ed Arthur would.”

Wood’s met Ed Arthur at BAMMA 15 when the two rising stars were both undefeated and looking to solidify themselves in the UKMMA scene, Wood’s was 4-0 and Arthur was 2-0. In a fantastic back and forth fight it was Arthur who was able to make the breakthrough in the third round and sink in a rear naked choke to take the win. And while the fight at the time made sense for both men’s careers, Wood’s would love to get a chance at a rematch with Arthur in the future. “He is on a winning streak so after losing I doubt I will get that match together right now. Ed is a very talented guy and I’m hopefully that the rematch will happen in the future. All I can do it keeping doing what I’m doing and see what happens. I know that if the fight happens again the result will be different”

While Wood’s will have to wait to see what awaits him in his next bout he is fairly certain that BAMMA will do their best to meet his needs, something which was the deciding factor when deciding to sign with the promotion on 15th January 2015. “BAMMA for me just seemed to have a plan laid out for me, with some potential opponents and lots of dates set. Obviously the potential opponents has probably changed now given the loss but we will see. Following the fallout at Cage Warriors I am glad that I made the right decision to sign with BAMMA.” 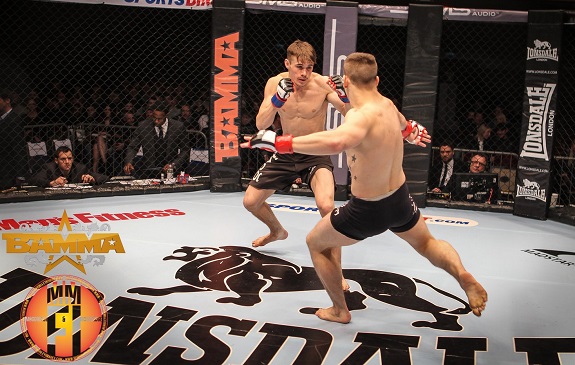 Prior to signing with BAMMA, Wood’s was coming off a win at Cage Warriors 74 which was his first appearance for the promotion. That fight card was the last for Cage Warriors under former CEO Graham Boylan and following a lot of changes at the promotion, there is a lot of uncertainty surrounding the promotion as we continue into 2015. Wood’s confirmed this hadn’t played any factor on his decision to move to BAMMA. “I honestly didn’t know anything was happening, I mean I heard some rumours but that was all. Having fought for both promotions I didn’t really find too much difference between them. I thought for both at the Copper Box and obviously Cage Warriors result was much better for me so that helped with that experience but otherwise I haven’t seen any real difference.”

One of the toughest things for professional fighters to juggle is the need to hold down a full time job whilst training and trying to make something of themselves as a fighter. And for Wood’s this is something which he has to deal with every day, although as of late he has had some help and support from his employers. “Well luckily the guys I work with now allow me to take days off here and there which is a huge help but that means I don’t get paid. It’s tough, I’m constantly broke because I am self-employed so if I want time off to train then I don’t get paid. I justify it to myself but saying that I’m investing in myself and I will get more back in the future, but yeah it’s tough. If it came down to working or fighting though I would train full time without a doubt. I would much rather be poor and doing what I love for a living.”

Nicknames are always a good way to differentiate a fighter and I was interested to get Wood’s comments on his nickname, The Prospect. For one, how did the nickname come about? “Lots of people started calling me it before I even started fighting. Then I was watching Sons of Anarchy and they call some of the younger guy’s prospects and I liked it and thought it would be a pretty cool nickname.”

So with the origination of the name cleared up I wanted to understand from Wood’s, when does a fighter stop becoming a Prospect? “Until I have UFC gold around my waist I will always be a prospect.”

Nathaniel would like to thank “My manager Elite MMA Agency, my sponsors Fight Store Pro, Athletic Edge & Sutton car care. Also like to thank my team Nova Forca and Team Titan and my dad Gary Wood and Joe Miles who is my striking coach. Also want to thank my girlfriend for putting up with me during weight cutting week.”