Last night was a big night for Irish MMA, a fighter and Cage Warriors. Donegal’s own Joseph Duffy made his long anticipated return to the cage after pursuing a boxing for the past couple of years.

It was a big gamble for Cage Warriors throwing him in the main event of their show in Dublin, but it paid off. A lot of attention had been put on this fight and the return of ‘the man who last beat Conor McGregor and Norman Parke’ with US MMA media paying attention and giving some unusual coverage of a Cage Warriors event. Earlier this week I compared the situation to two movies delving further into the ‘hope’ and ‘hype’ surrounding Duffy.

The last time Cage Warriors invested this much in Duffy was the last time he fought back in 2011 for the CWFC title, a fight he lost. It was a big shock to everyone, Duffy had been 10-0 and was seemingly unstoppable en route to that title. But some unfortunate luck (a broken hand) lead to the defeat.

This past week had some similarities to that same period nearly three years ago. A lot of hype and attention surrounded Duffy with expectations high and might for the fighter. This time however it was a lot different, Duffy won.

His striking, no doubt aided due to his recent undefeated boxing run, was crisp the first two rounds and it wouldn’t be a Duffy fight without a submission as he sunk in the rear-naked choke on his French counterpart Damien Lapilus in the third round.

Duffy is now 11-1 with ten stoppage wins, 8 submissions and 2 TKO’s. This first test has been past with flying colours and if you had any doubt before this fight you should now believe the hype. 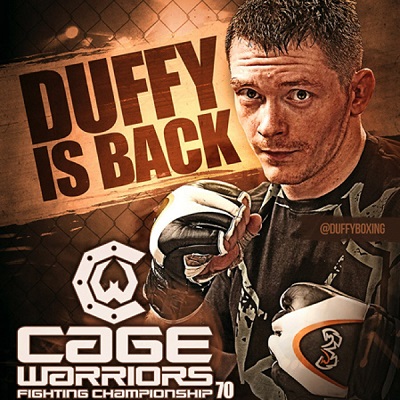