He has fought just about everywhere in promotions such as Pride, Elite XC, KSW, Dream, SFL, and Cage Rage, but now  on June 6th James “The Colossus” Thompson (19-14, 1 NC) will enter new territory as he is set to make his Bellator debut facing another giant in Eric Prindle (8-5, 1 NC).

The 35-year-old has been on a bit of a run as of late and is undefeated in his last five fights since 2010 posting a record of 4-0 and 1 no-contest, with wins over Mariusz Pudzianowski, Bobby Lashley and former UFC heavyweight Colin Robinson in his latest outing.

It was that last win over Robinson at UXC II in Belfast a few months ago that Thompson has said has lit a fire within him to compete again and now after months of seeking out a suitable challenge he has finally found it in the form of Bellator.

“I’m pleased to announce that I’m fighting Eric Prindle at BELLATOR on June 6th. This is a chance I’ve been waiting for, something to get my teeth in to (is biting allowed in Bellator?) Roll on the 6th, Can’t wait… GRRRRRRR,” said the fighter via his Facebook page.

Prindle has been a member of the Bellator roster since 2011 and once challenged for the heavyweight title following a four-fight undefeated streak in the promotion. He lost the title fight to Cole Konrad, a fighter many believed at the time to be on the way to being the best in the world. Since then his only win came outside the promotion defeating journeyman Vince Lucero (you may remember him losing to Batista). 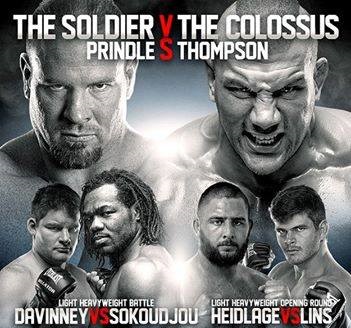