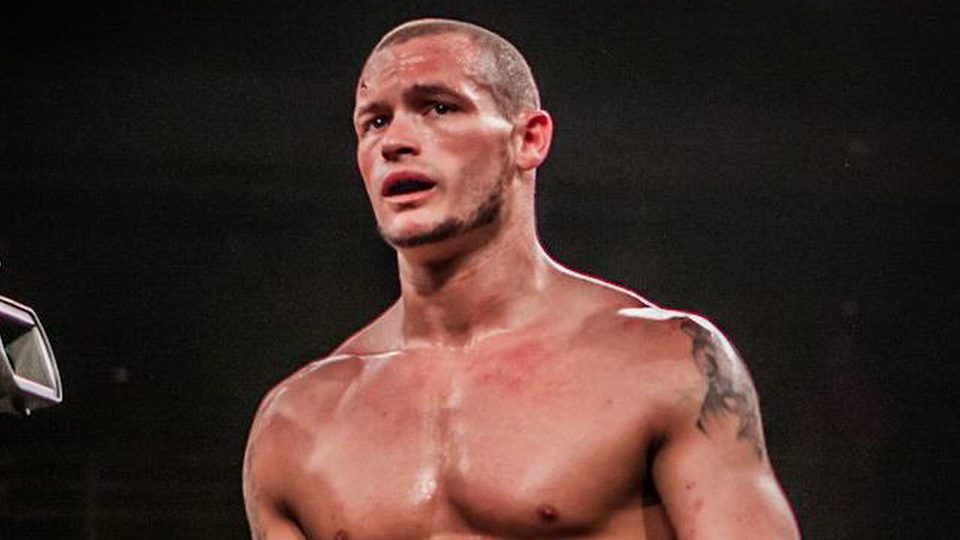 Continuing with the series of chats with kick boxers and trainers around the world, this week I had the pleasure of speaking to Eddie “Showtime” Walker.  Eddie was a participant in The Road to Glory tournament as well as a participant in Glory’s London event.  Eddie Walker belongs to the large and growing group of fighters who not only train to make it for the big show, but who also work at other professions to support his family and training needs.

With new opportunities on the horizon as a fighter Walker comes across as committed and dedicated to his craft.  His beginnings as a fighter had more to do with a love of the sport and doing something that would keep him fit and on his toes.  It is obvious, however, that Eddie continues to have a great love for the sport and is dedicated to help promote it and move forward as a fighter.

SW: You’ve been described as a knockout artist, very calculated and/or a aggressive fighter.  How do you characterize your style?

EW: I wouldn’t say that.  I try to focus on my strengths and see what the other fighter is doing, I don’t go in
specifically looking for the knockout.

SW: Having seen Schilling take the title at GLORY 10 are you anxious to get back in the ring with him again
or do you have someone else in mind first?

EW: I’m happy for him.  I just look at it like, if you’re above me in the rankings that’s who I want to fight.  I was
#6 at 85kg but at the bottom at 77kg, so I just look for opportunities that will help me move up in the
rankings.

EW:     It came from a promoter, I had fought a couple of guys and finished the fights in less than sixty seconds and it just kinda went from there.

SW:     Are you still working your regular job?

SW:     If so, how do you find the time to balance training, fights and work and family?

EW:     If it weren’t for my wife being behind me 100%, she’s very understanding.  I mean,  times when I have to really buckle down and train, I can do that.

EW:     It was great, a good opportunity.  It was in Macedonia.  I got to compete with people from all over, it was a good experience.  I think I had two professional fights.  The first fight I had a KO and 3-4 days later, I fought Sahak (Parparyan).  I got KO’d but, I was excited, it was one thing that helped to get my name out there.

SW:     To date, who’s been your toughest opponent?

EW:     I fought Steve Wakeling at Glory 5 in London, he kicked my leg to sleep but I’d say that Sahak Parparyan was also very tough.

SW:     You participated in the Road to Glory tourney, what was that like for you? You ended the tourney in second place correct?

EW:     Yes.  It was my first time in tournament style.  I also ended up having injured my right hand and after that I went on to fight Mike Lemaire.  Fighting in Glory has presented opportunities though.

SW:     So, after seeing the Glory show, is kickboxing back?

EW:     Absolutely!!! I was threatening friends, telling them they’d better watch and they were excited!

SW:     Can we expect to see you fighting soon?

EW:     Yes, I am possibly fighting in the near future, my manager has been looking at a few things.

EW:     I really like Joe Valtellini and it would’ve been great if the fight between Spong and Corbett had gone longer.

SW:     Do you have anything to say about the debate on which combat sport is the most difficult, i.e., MMA, boxing, kickboxing/muay thai?  In my recent chat with Thom Harinck, he mentioned that one advantage MMA has is the ability to take the fight to the ground, while in kickboxing/muay thai, fighters don’t have that luxury, they have to stand and fight it out.

EW:     I agree but it depends on what you’re traning.  For me MMA would be hard as hell, my body isn’t conditioned for that.  Even when I spar, I’m more conditioned to box, I like standing up, I don’t like laying on the ground

A few fun facts about Eddie:

SW: What’s the first thing you do when you get up?

SW:     Japanese, Thai or other cuisine?

SW:     Any other fighters you really like to watch?

So, there you have it.  A closer look at the fighter many know as “Showtime”.  It’s clear that he’s about business both in and out of the ring.  He’s also I fighter I hope to see more of in the future!