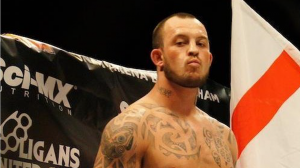 It will be one year ago to the day on October 5th that Mark Godbeer was due to make his Bellator debut against Ron Sparks, but a Career threatening injury kept his debut waiting, WHOA! TV’s Emma Bramford gets to talk to Mark about his Injury, training and his Debut Bellator Main Event fight against Cheick Kongo one year on.

EB. You have not always been a heavyweight fighter have you?

EB. We saw your first fight at Heavyweight for the promotion BAMMA 9 back in March 2012, when you fought Catlin Zmarandescu, where you picked up a win in the first round due to TKO (corner stoppage), how was it for you, stepping up in weight and gaining the all-important win in the new weight division?

MG. It was great, after coming of a loss at my previous weight division of Light Heavyweight to Anthony Taylor, I felt that I was really cautious but I kept my cool, picked my shots and got the job done, so to get the Win was great it all paid off.

EB. Was it your intention to move up to Heavyweight for a few fights before Bellator come knocking, or was it a choice made with you and your coach to move up a weight division way before thinking anything Big was coming your way?

MG. After my last weight cut at light heavyweight I felt I was skinny as a rake, you see the likes of Max Nunes, they are big and they have a lot of muscle; I also being of a certain age was finding it a bit harder to cut those last few llbs so I had decided it was time to go back to my old days to Heavyweight, talked it over with my manager and he agreed, but I am still today walking around at 240-242llb.

EB. You train out of Trojan Free Fighters in Cheltenham, which is home to a lot of great UK & European talent, and it is safe to say it is firmly putting their name on the Map; what helps make Trojan Free Fighters one of the best contended gyms to be a part of today in producing top athletes such as yourself?

MG. Trainers without a doubt Paul Sutherland is one of the best coaches the UK have to offer, Team bonding there are no egos in the gym, everyone pushes each other and all so competitive, everyone helps one another, were like a family unit.

EB. How did your fighting nickname ‘The Hand of’ come about?

MG. It’s ‘The Hand’ I just tied the rest of it into my name, but after my first professional fight against Sam Hooker a couple of my friends started to call to me ‘The Hand’ after seeing the fight, that I landed a couple of monstrous right hands and it’s been that ever since.

EB. You were due to make your Bellator Debut back on October 5th 2012 against Ron Sparks but due to a career threatening Neck and Back Injury you had to withdraw, how did this injury occur?

MG. I was driving home from wrestling training when I had real bad pains in my neck; I then lost complete feeling in my hand and was rushed in for an emergency MRI, then rushed in for an emergency operation, I cannot pin point how as such it occurred, just accumulation of training which did result in a crack in my vertebrae and herniating the disc.

EB. Going from an all-time Career high, being signed to one of the best organisations in the world Bellator, then to have to deal with something that could off quite easily been the end of everything you had worked so hard for, how was it in those months after your injury for you?

MG. Horrible, worst time of my life, depressed, I became reliant on painkillers for a brief time it was a horrible part of my life, I could not do nothing for 6 months, for 5 of those months I was in a neck brace; going from training every day to doing nothing, it really got to me as everything I liked doing before I was unable to do, to make matters worse when I had my operation that went wrong so I had to end up having another one!

EB. What kept you going through the darkest days to motivate you, to give you strength and determination, when at some points you could off quite easily given up?

MG. After the initial 6 months I couldn’t sit around and do nothing anymore so I started teaching at one of the local clubs, although I could not join in, I was still part of the MMA community it then progressed from there, I decided to put all my effort and energy into opening my own club in my home town of Brigwater, Sommerset, keeping myself involved in MMA kept me going.

EB. It was announced on Sunday September 9th that you are making your long awaited Debut for Bellator on 4th October against ex UFC Heavyweight fighter Cheick Kongo, not a bad start to Bellator 102, what do you think? (I’m smiling)

MG. It’s a great fight, great main event, and exposure but Bellator know what they are doing; a lot of people have already wrote me off, he is just another man, forget about his UFC career, forget who he has fought, look at him as a fighter, I know I can truly beat him.

EB. Does it usually bother you, who your opponent is when it’s been decided on a fight for you (obviously you agree to the fight as well as your coaches and management team), or is it just a case of getting on with the job in front of you?

MG. I’m at the level now where we don’t turn down fights, we are there to be tested and that’s the good thing with Paul Sutherland; we’re professional fighters and if the fight is there we will fight who is put in front of us.

EB. Being out for 18months, does that bother you mentally? Will there be any ‘cage rust’ so say when you step into the cage to face Cheick Kongo? Or will Head Coach, Paul Sutherland will have made sure you have been prepared for this fight 100%, facing the famous ‘Meat Day’ sessions full on every Sunday to make sure you are prepared?

MG. Without a doubt I am ready for this fight, I don’t believe in the term ‘Ring Rust’, the nerves are different on fight day which are good nerves; if I have prepared for every situation in the gym and had the right training for this fight (for which I have), then I am not going to be shocked, I’ve been in with some big guys over my fight career so far and I know what to expect.

EB. You bring an astonishing record of 8-1 into the cage and not only that but you have also never seen the third round in any of your 9 professional fights with 6 of them coming via TKO/KO which again is also impressive; how are you going about preparing for what I imagine is your biggest challenge to date as in Cheick Kongo?

MG. It is going to be the biggest fight of my life, but I cannot look at this fight as it’s ‘Cheick Kongo’, I am looking at it as he is another man who has hole’s in his game and I will exploit them, also being prepared for his strong points, as there will be times when he will be stronger, but also times when I will be stronger.

EB. Although a lot of people would only be looking at your opponent’s name and career record which is 18-8-2 and then looking at your name and career record 8-1, they probably won’t be looking at the bigger picture, which is when you actually break down Cheick Kongo’s win’s, his KO win is 10 and submission is 3, put that together with yours, KO wins 6, submission 2, I call this a very even fight, what can Bellator fans expect to see on October 4th?

EB. If you could change 1 rule in MMA what would it be?

Anything – I’m a heavyweight now!

EB. What song do you usually sing in the shower?

A bit of Neil Diamond