It was a successful night for the reigning champions at KSW 34 on Saturday night in Warsaw, Poland.

The main event saw another powerful performance from Karol Bedorf (14-2) as he defeated veteran James McSweeney (15-14) via TKO in round one. Bedorf once again utilized his thumping kicks to get the win. He threw them to the body and head of McSweeney forcing the Englishman back up against the cage where Bedorf unleashed a barrage of punches and knees that eventually dropped McSweeney and forced the referee to step in.

In the co-main event Tomasz Narkun (12-2) scored his second straight TKO win. After gaining his first ten wins all via submission Narkun initially captured the title with a TKO win over Goran Reljic in London. And he followed up that emphatically at KSW 34 when he finished Cassio Barbosa (17-7-1) with a flying knee followed by punches in the first round.

Artur Sowinski (17-7, 2 NC) also got the job done beating Fabiano Silva (26-7-1) via decision. It wasn’t as spectacular as the main and co-main event but nonetheless Sowinski displayed superior striking and excellent takedown defence to get the unanimous decision. Sowinski is now undefeated in his past six fights with five wins and one no contest. 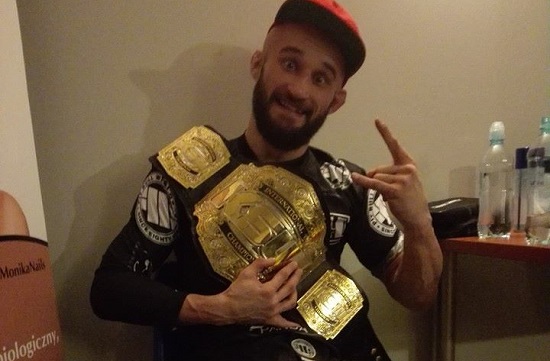