If you watched UFC 187 the other night then you will have noticed that Arnold Schwarzenegger himself was in attendance. It is a big deal for the UFC to show which celebrities are at the fights as it helps them get a message across to the viewing public of ‘yes, we are accepted by famous people’. It is high school level ego stuff but it needs to be done as it is a form of  marketing.

Arnie is a special type of celebrity though. A multiple world champion turned action film star turned politician turned film star again, very few men can claim the success story he’s had. The UFC even mustered together a little almost embarrassing montage of images onto a short video of him posing with different fighters on Saturday night.

Arnie does have a big movie coming up (Terminator 5, if you haven’t known) so his presence there was probably in connection to that. A natural thing for movie stars to get their face out there appearing at events and talk shows in order to boost attention on them and in-turn their upcoming movie. However, one thing that struck me on twitter was that the following day he appeared at Conor McGregor’s MAC Mansion in Las Vegas.

I guess we will find out soon what the reason was for the visit whether it was to film something to use as promo for either the UFC or Arnie’s new film or whether it was to simply visit and talk with McGregor and his team, or both. 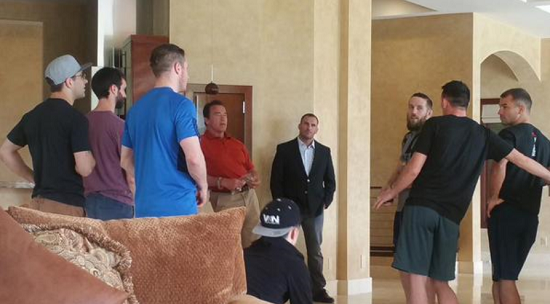