KO specialist Paul “Semtex” Daley makes his return to the BAMMA cage to headline BAMMA 16 against Marinho Moreira da Rocha. Daley’s original opponent Igor Fernandes was ruled out of the fight due to a broken tibia which he suffered training for the fight but for the fans da Rocha poses a lot more threat on the feet than Fernandes. With only a few weeks away from the fight though the change in opponent has not phased Daley who is fully prepared for any eventuality the fight game may bring. “A fight is a fight. Im either fighting a striker, a wrestler, or a Jiu Jitsu guy. It’s easy for me to alter camp for one to the other, my game plan just stays the same.”

New opponent da Rocha (28-6 MMA) is a member of the Coalizo Fight Team and boasts a 75% stoppage record. He comes into the BAMMA 16 fight hot off the back of six KO victories and will certainly be looking to test Daley’s chin when the two heavy hitters collide. Something which Daley is very much aware his opponent is more than capable of as he enthusiastically offers, “I am very focused on not getting hit by his heavy punches.”

BAMMA 16 will mark Daley’s forth outing for Europe’s flagship promotion and possibly the last time we will see him on home soil given his new contract with Bellator. So what’s behind the relationship with BAMMA and why has Daley continued to fight for the promotion when returning to fight in the UK? “Well BAMMA are always very easy to approach and work with. They know my intentions with my career and are happy to get me there.” 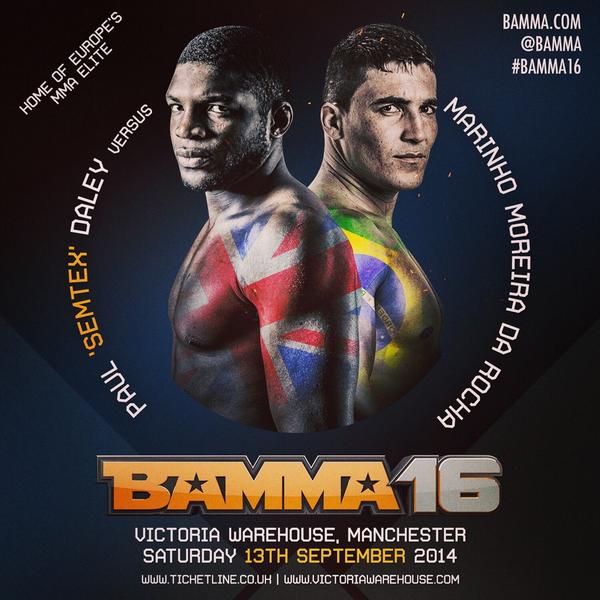 The intentions for Daley much like many over aspiring MMA Fighters are to get themselves known across the globe and in July 2014 it was announced that Daley had signed a contract with US promotion Bellator. And for Daley he has not signed up just to be another guy on the roster, he is hoping for big things in a short space of time. “I want to fight in the big fights. A world title fight would be awesome. But after a nice entry level fight first.” So when potentially could we see Daley return to Bellator? “Hopefully November.”

While title shots and future aspirations may have played part to any contract negotiations between Daley and Bellator the negotiations would not have even taken place had Bellator not appointed Scott Coker as their president. Daley is resolute as he confirms what seems to be the popular opinion among media outlets, “I would not have joined Bellator without him being there.”

It’s difficult to read or listen to an interview with Paul Daley without the topic of his desire to return to the UFC being mentioned so by default I had to get it mentioned. And whether or not it’s on his immediate agenda I sense the Paul Daley we see today is very much different to the one who got kicked out of the UFC back in 2010. “My ambition is to be the best fighter I can be. Simple. No matter where I am fighting.”

That fateful night back in 2010 will be forever etched in his memory, but keen to focus on the positives rather than the negatives I wanted to know what the greatest moment of Daley’s career had been. The answer did surprise me as I would have put money on a whole hosts of answers ranging from knocking out Martin Kampmann at UFC 103, to the now iconic knock out of Scott Smith. But here is Daley’s highlight of his career so far. “Mark Weir, Wembley Arena. My Cage Rage World Title Victory.”

Daley certainly now has a great platform in Bellator to show his skills on a global level and will be looking at his fight for BAMMA as a tune up prior to flocking to Stateside. I asked Paul if he had any last words for his UK fan base who are found in full force at the BAMMA events. “Come out and support me at BAMMA 16. It’s a stacked card with a lot of entertaining fighters. I am going to be on form and entertain as usual.”

Tickets are still on sale