In what is becoming more and more of a regular occurrence for Artem Lobov, this weekend we learned (via Lobov’s coach John Kavanagh) that yet another opponent has pulled out of fighting the SBG fighter.

Lobov had been scheduled to fight Adrian Zielinski for the Lightweight Title at X Cage 7 in Poland on March 14th but, as you can see from the below screenshot, which Kavanagh released on twitter, it seems that Zielinski and his team are more interested in paving a way for their fighter to get to the UFC than taking a fight with Lobov. 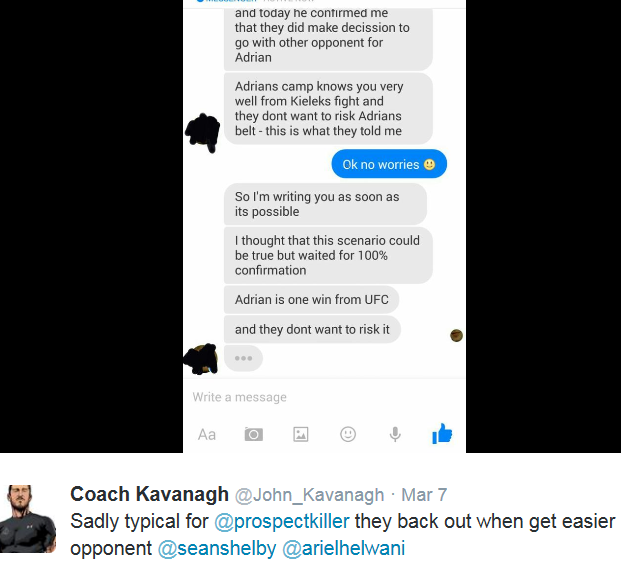 John Kavanagh had confirmed that they were happy to take the fight on 3rd March and within days Adrian Zielinski had withdrawn. We asked Artem to talk us through exactly what happened from the time the fight was confirmed to receiving the news that yet another opponent had dodged him.

“I had about five or six different people messaging me on Facebook offering me the fight and people texting John. So we spoke and I took the fight, emailed passports over to the promotion, confirmed my corner etc. and it was confirmed 100%. Then we got news that the fight was off and that they had found another opponent for him. You have all seen the messages that John received so it is what it is.”

Despite the disappointment, Artem is quite understanding but realistic of the whole situation. He stated that he would certainly fight him in the future (surprise, surprise) but does not believe his management would allow it.

“You know, I understand why his management are doing it. They said they wouldn’t be happy taking the fight on short notice and wanted more time to prepare, otherwise they would be ready to fight me. But this isn’t the first time it has happened with him because there was another incident with them earlier this year and they wouldn’t fight me and that was with a lot more notice. Would I like to fight him? To me it doesn’t matter who I fight providing it’s an actual fighter who is good challenge and will test me. I’m sure Adrian would want to fight but I’m guessing it’s his management who are afraid or not confident enough in him.”

The most frustrating thing for Lobov though is not the loss of earnings or the training camps for fights which never come to fruition but the fact that fighters get the choice to withdraw from fights.

“The money and training all are minor things. The main issue is that people have a choice to pull out of fights, especially in this instance that it was a title fight. In tennis for example you can’t play guys you have selected them make your way to Wimbledon. This happens all time in MMA. The most frustrating part is that in this sport courage is such a big thing buts MMA is filled with cowards and people who are scared to fight.”

Lobov appreciates how some fighters will do just about anything to get into the UFC, but just can’t get his head around the mindset of a fighter who is willing to expose themselves in the UFC and ruin their chances of staying there.

“What I don’t understand though is why people would want to get into the UFC without being fully prepared and having already challenged yourself. If you get into the UFC you want to be sure that you make a run for it and make some noise. So many people I have been scheduled to fight are the same ones who do interviews and tell everyone they want to be UFC Champion, but they won’t even fight me?”

So what can promotions do to help reduce the amount of pull-outs that are occurring outside of the UFC? Artem suggests that making it more of a financial loss for fighters pulling-out or not accepting certain fight and that the risk/reward ratio is worth it.

“I think one thing to do is to make purses higher. The reason people afraid to fight is in case they lose and ruin their chances at getting to the UFC. The reasons they want to get in to the UFC is for money. So if purses were substantially higher it would make people take the risk. But if someone is fighting for a thousand euros then they are unlikely to take the risk. But the main change of course has to come from the UFC, real fighters need to be rewarded with contracts not the cowards with padded records.”

Whilst the latest pull-out happened on a smaller Polish promotion, Lobov has also encountered issues with fighters in larger European shows not wanting to fight him, most recently at BAMMA.

“Just before the last BAMMA (BAMMA 18) and the last one of 2014 (BAMMA 17) both Brendan Loughnane and Marc Diakiese refused to fight me. Chris Zorba, who I worked with at OMMAC, contacted John as both Brendan and Marc had opponents pull-out due to injuries. But neither guy wanted to fight me.”

Certainly a very frustrating time for the SBG fighter who obviously, as evident by this situation, remains one of the toughest and most dangerous fighters on the European scene.