Andy De-Vent gets a huge opportunity to win the BAMMA Lonsdale British Middleweight Title this weekend as he steps into the cage against Harry McLeman at BAMMA 15. Don’t be deceived by De-Vent’s 10-8 record. Since moving to Middleweight he has gone 7-0 and now signed a four fight deal with BAMMA.

TQ – Does fighting for a title have any detrimental changes to your fight preparation or is it business as usual as you approach this one?

ADV – No not really, I just stick to basic fight camp. Drills, techs, sparring, add more sprints and pressure drilling and just push yourself that little bit more each time. Business as usual for me.

TQ – Your opponent Harry McLeman is an ex solider and comes into the fight with a record of 6-2. How much do you know about Harry and have you done much scoping out ahead of this fight?

ADV – Yeah I’ve watched a lot of footage on Harry. Without giving our game plan away I know what to expect, what to adapt to and when to pressure. He is a good fighter with a tremendous heart and great skills, as am I! I’m sure we are going to have a great fight on the night.

ADV – Well I know it was kind of late notice but I was coast training for weeks. In fact I’m always training and have been hard since my last outing with Andy Punshon. After my fight with Andrew I was back in on Monday training hard as always (life of a real fighter ay haha)

TQ – Growing up on the infamous “Moss Side” of Manchester must have helped to mould you to fighting from an early age. Do you feel that having fought for most of your life that you have an advantage over most opponents and has it made being a professional fighter any easier?

ADV – Well yeah it’s helped me loads in my fighting career growing up in Moss Side and Chorlton areas of Manchester. I wasn’t born with a silver spoon. Hard times them days with the things I’ve seen and done in my life. I’m Manchester bred from the streets! A fair few of my friends have been killed on the streets of Manchester by guns or knives or are doing life imprisonment for it themselves. You can’t change the past but you can change your future and MMA changed mine for the good. As a kid growing up I was always fighting or getting into all kinds of trouble and as I said a lot of the things I’ve been through and seen in life prepare me for conflict 24/7. Sad but true!

TQ – You have talked about your win over Avi Jack as being the most significant in your career so far given that it was a rematch. Do you feel that the fight on Saturday will be bigger and have a greater impact on your career if you get your hand raised and win the gold?

ADV – Yeah the rematch with Avi was personal to me, nothing to do with ranking or money or bragging rights it was a Demon I had to release. It haunted me for over 2 years but that demon has been vanquished now, it was a great win for me spiritually and elated wasn’t the word! Yeah the fight on Saturday coming is going to be my biggest career defining moment ever. To fight for the British number 1 title on the best show in and around Europe let alone the UK and live on TV all over the world speaks volumes for itself. I’m going to welcome this with open arms and of course it will have a major impact on my career without a doubt when my hands are raised in victory!

TQ – You flirted with Welterweight early on in your career but have had much more success at Middleweight (7-0). What if anything did you learn from your losses at Welterweight and do you feel that they contributed to your recent success?

ADV – Well a lot of people know my welterweight fights were hit and miss. I never felt alive at that weight like I do at middleweight! Middleweight for me is just perfect. I’m fast, explosive, lots of gas and just always feel so focused at 84.

TQ – Being a fighter on the UKMMA scene can be tough financially. How do you cope with the financial strains of being a professional fighter and how would you describe the process of gaining sponsorship? Is this made any easier by fighting for BAMMA?

ADV – Well yeah it’s hard being pro and having no sponsors or some who pay nothing. Really it’s frustrating to upcoming pros that need that support badly. Let’s hope a decent sponsor sees me shine and wants to push me even further in my career. As always I will survive I’m a survivor, I have always got there eventually myself. I put it down to hard work and determination.

TQ – You have pledged at least your next four fights to BAMMA and this will be your first outing for the promotion. How have you found working with them so far and do you ever get “first day” nerves when fighting for a new promotion?

ADV – Yeah I have signed a four fight deal with BAMMA and I intend to uphold my part of the contract and always come fight prepared and ready for their shows. I will fight whoever they put in front of me no questions asked. I think BAMMA have signed a great fighter signing me. It’s an honour to be part of their roster of combat athletes.

ADV – Yeah I would like to thank all my sponsors: Achieve Capital Finance , Gladiator Fight wear, Compel Med Therapy, Liquid Sports Water. All of the Team Lions Paw, all Unit 7 Gym lads, No Limit MMA lads. And especially all my coaches Ali Arish, love this guy loads changed me into a phenomenal fighter. Kev Morris, Vic Scott, Ben walker and last but not least Daren Morris ASW head Coach. Oh and my lovely misses Helen. 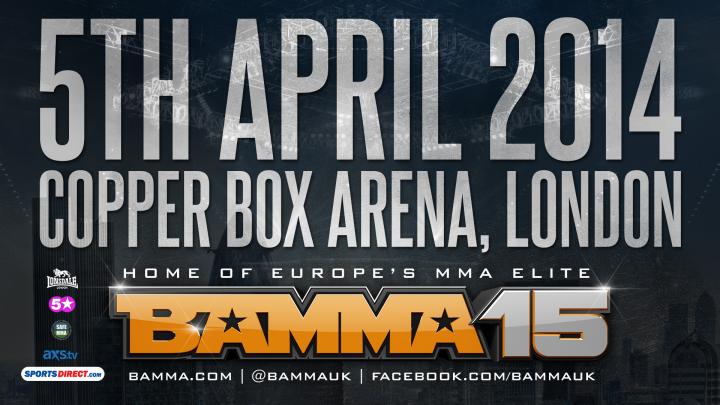