The state of Pará, Northern Brazil, has produced some high level MMA fighters over the years, former Light-Heavyweight champion Lyoto Machida, among them. The majority of those fighters come from the state capital, Belém. Very little known though, is the fact that Pará has also produced its own style of fighting, the “Luta Marajoara”, brought to life in an Island belonging to that state, called Marajo. An approximately 15,500 mi² portion of land surrounded by ocean (Atlantic) and river (The Amazon), Marajó is the world’s largest island of this kind.

Early evidence of this form of combat date back to more than three hundred years ago. The most common belief is that it was created by the indians of the Aruã tribe, known for being incredibly strong individuals.

Taking place inside a circle drawn on a surface of sand or clay, the Luta Marajoara match begins with the two competitors stepping forward using a lead leg and then touching each other’s foot in a parallel position. The competitors are also allowed to grab one of their opponent’s arms before getting the go ahead from the referee.  Just like wrestling, the goal here is to put the other fighter on his back. The sand or clay will then work as proof, just in case any doubts come up regarding the end of the fight or the declaration of the winner. In case neither competitor is able to achieve his goal, the two judges and the referee will vote for the victor, based on aggressiveness and activity during the match.

Many of the takedowns in Luta Marajoara are applied with the fighters diving head-first into their opponent’s midsection, which probably raised the notion that this style was inspired by Buffallo fights. Buffalos are plenty in that area and they are also one of the most important symbols of the Island. As time went by, other influences were coupled with the original version of Luta Marajoara. African slaves who had been brought to Brazil since the XVI century also contributed with their own techniques. 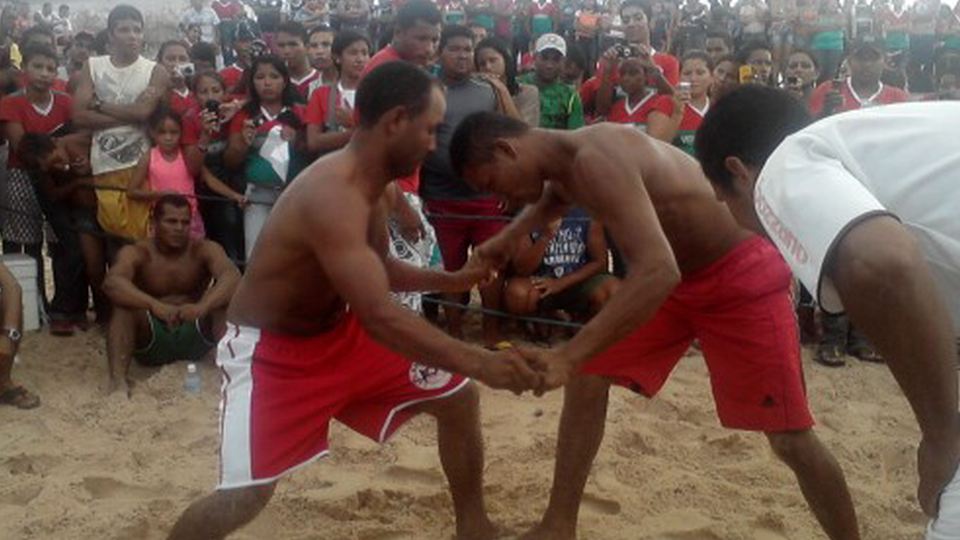 The style was developed throughout the Island after friendly contests between fisherman and farm workers became frequent. Nowadays, organized tournaments happen during city festivities across the Island. The rules differ from one town to another, but the match will usually be fought in a single five minute round, with the possibility of an extra-round lasting three minutes.

More recently there have been a few rule changes in Luta Marajoara, in an effort to avoid serious injuries during contests, especially to the spine. Neck cranks and slams such as the “Infincada”, a type of Pile Driver, were then proclaimed forbidden.

In order to keep up with such physically demanding training and competitions, fighters will be on a steady diet of Açaí juice and Turú, rich in calcium and iron mollusk, eaten fresh from tree trunks, where it is found.

Just like Belém, Marajo has also got its representatives in the big MMA stages of today. Having started their martial-arts training in the sands of the Island, the Alcântara brothers, Ildemar and Iuri, both currently on the UFC roster, are now the Luta Marajoara most prodigal sons. Sure enough, they have both been given the responsibility of carrying the nickname “Marajó” into the Octagon.

They have also been given the opportunity and the joy to show the world what the Luta Marajoara practioners are all about. According to Iuri, who, much like his brother, began his training at a very young age, explosiveness and agility are the most prominent characteristics that a Luta Marajoara fighter will be able to showcase in a fight. He sees those aspects as crucial for anyone to succeed in modern MMA. Also important is the takedown/ takedown defense game, which he believes to be his most valued weapon.